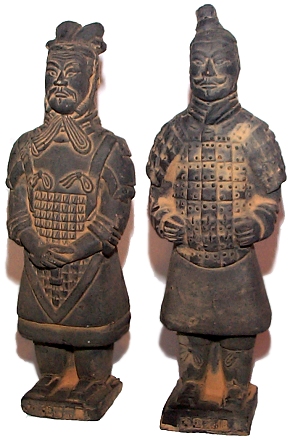 In 1935 Indiana Jones ventured into China near the region of Xi'an where within an enormous trench were discovered thousands of terra cotta statues of soldiers, horses and war carts. Buried near the mausoleum of Qin Shihuang, the first emperor of China, these figures represent the immense army of this ancient ruler.

Shown here are four figures commonly repeated within the famous archaeological find. The standing warriors (just over 6" each) are an officer, identified by his ornate hairstyle and ribbons, and an infantryman. The kneeling soldier (5") is a crossbowman, about to shoot. Also shown is a war horse (5") complete with saddle.Each piece is cast ceramic and painted to give a truely aged appearance. 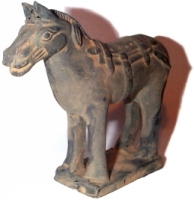