The Grail Diary would not be complete without these inserts and extras: 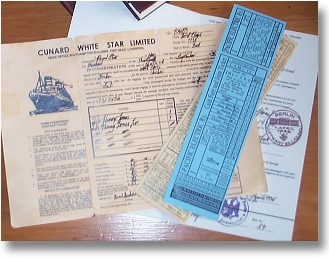 During Henry's forty-year quest, he traveled extensively in search of clues. He kept a few tickets as momentos. Two vintage train transfer tickets are used as bookmarks, one of which to mark the Three Trials spread.

While escaping from the Germans, Henry and Indy flew aboard a Zeppelin bound for Athens. This ticket is based on actual Zeppelin documents from the 1930s. It is complete with two Nazi stamps.

After the quest for the Grail, Indy and Henry head home aboard a White Star steamer to Quebec, according to one Grail Diary insert. 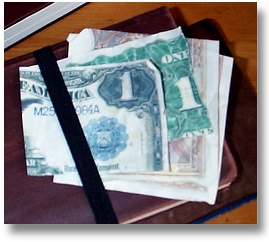 This 1930s era French franc is an over-sized bill also used as a bookmark in Henry's diary. Unlike the 1899 Certificate, it remains uncut, but heavily worn like most real-life money. 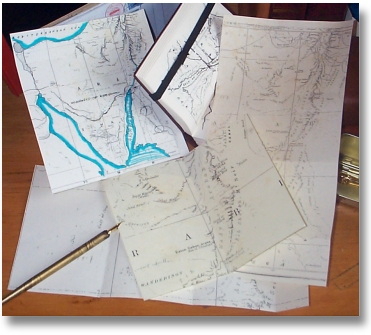 Throughout Henry's quest, he collects several maps which he uses to pinpoint the final resting place of the Holy Grail. These four maps, shown here loose, are all folden and pasted into the Diary each showing different portions of Arabia.

A few of these maps are also hand-drawn into the Diary showing different details and focusing on various features. 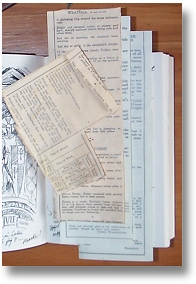 These four quote sheets contain various tidbits of information, kept by Henry as bookmarks. One is used to mark the Venice Window pages. On these sheets are famous quotes from George Washington and Benjamin Franklin. 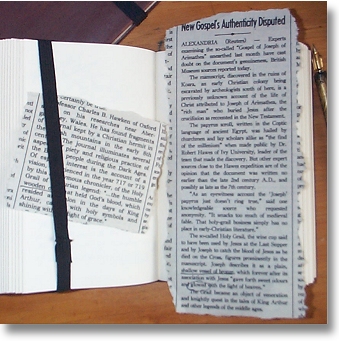 Printed on newsprint paper using authentic vintage fonts, these articles look like the real thing. One article tells of the discovery of what might be an eyewitness account of Joseph of Arimathea. The other contains more references to the Grail as well as another account of its description.

Even though I paste these down to pages in the diary, both articles are double-sided to add authenticity. 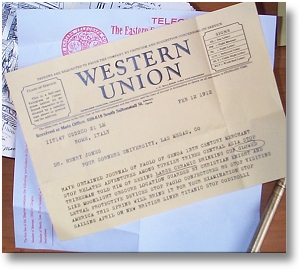 These two telegrams are based on actual vintage documents. Both are from friends of Henry, keeping him up-to-date on their progress. 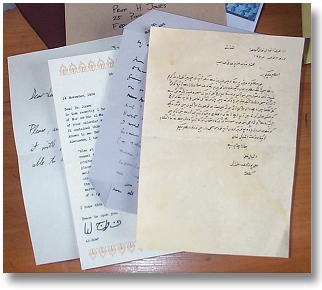 To the right are three letters from Henry's friends and collegues. Two are from Arabs, one in Arabic and one in English. Also shown here is a letter from Henry to Indy which he sends along with the Grail Diary, warning his son to keep it safe. 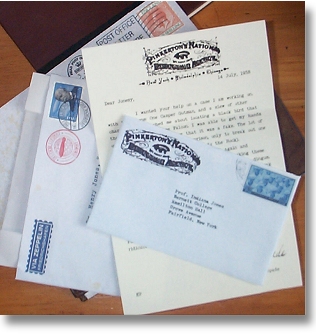 These three letters come complete with envelopes on which are postmarked vintage stamps. Two are to Henry from friends giving him more clues to the Grail, while the other is a letter from Sam Spade asking his friend, Indy, with some help regarding a certain black bird. The Pinkerton's envelope is based on one of the props actually used in the film. 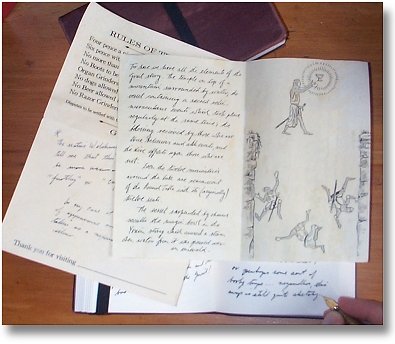 Mentioned in the Computer Game Diary, this is a translation of a Welsh poem written on a rules sheet for the Purple Dragon Inn, where Henry heard a bard sing this song. It is two sided; the side shown having Henry's thoughts on the poem, the back side having the translation itself.

On top of this insert is a double sided sheet containing notes, clues and drawings related to the Grail. Drawn here is one version of the third trial protecting the Grail lair, the "Leap from the Lion's Head". 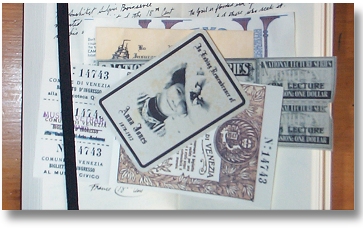 Here are several different inserts thrown into the Grail Diary. Amongst them are a memorial card for Henry's wife, Anna Jones. On the back of the card is a traditional prayer for the deceased.

Also shown is an authentic vintage ticket to a Venitian museum and a ticket for one of Henry's lectures. 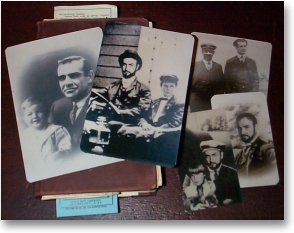 Shown to the right are five photo reproductions I made to accompany the Grail Diary. They show Henry and young Indy during his early years of childhood. They are printed on high-quality photopaper, with the photographers logos printed on the aged backing. 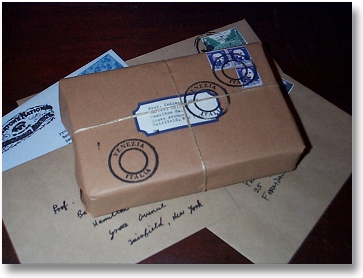 I also made this replica wrapper in which the diary was shipped to Indy. It is complete with replica Italian stamps and Venice postmarks. Also shown are four envelopes to Indy and Henry, all of which were seen on film.

The Roman Numeral scrap is an easy enough to make, but for accuracy I printed it from scans of the original.